With the Germans being amongst the most conservative investors in Europe has meant that they have been hard hit by the low interest rates, losing money on their savings. The sums speak for themselves: since 2010 on average every German saver who has their money park in savings accounts etc, has lost around 2.450 Euro in total.

Around 2.1 trillion Euros are lying around on these savings accounts alone in Germany. And whereas it used to take around 16 years, at an annual interest-rate of 4,6% p.a. to double your savings, nowadays it takes 290 years (at 0,24% p.a.).

For years the media and industry have been trying to address this issue, which brought us to decide the tackle this social issue with probably one of the most unusual finance campaigns in Germany over the last decade with the “evil zero”.

It’s aim – highlight the issue in a totally new and unexpecting way which is easy to grasp and moves people to hold a dicussion about the issue. No complicated maths, no financial jargon, no formulas, just a simple “monster”. 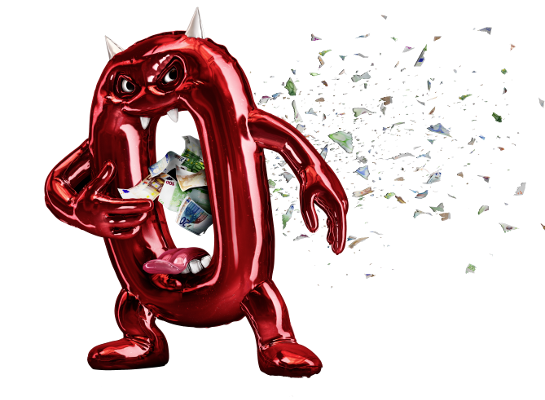 The campaign has been created again by the wizzes at Havas Düsseldorf. And it is moving the people…

The campaign focuses around the evil zero, is promoted heavily through social media, classical online advertising, press coverage and also TV sponsoring, as well as a nationwide street campaign.

For the first time we have also aimed a campaign at a younger audience, who really needs to start thinking about their futures more than the next weekend party. This focus has led to the development of an indepth content campaign including two app games, simplifying the idea whilst being aligned with our overall campaign idea of getting people to “Rethink Investing”, as well as working with young online influencers with information. And on top of this the campaign has been developing loads of video material addressing the issue.

On top of this we have worked closely together with Deutsche Bank and have added the “Evil Zero” into all Deutsche Bank branches nationwide. This has bought the topic into the financial discussions over the counter.

The campaign has been running for close to a month now and we’re impressed.

To highlight this the campaign has been built in order to get other people to discuss the issue by using, as I like to call it “word-of-mouth” old-school communication, to spread the message via “modern” social media channels.

Check out the social wall here.

Let’s see where it goes….